The Flat knife by GHION for Forge de Laguiole

Forge de Laguiole fosters a long term and fruitful relationship with French design and French designers. The «Flat» designed by Christian Ghion stands for a high point in this story renewing the approach of cutlery creation.

With his iconic «folding knife», Philippe STARCK sharpened up the features of the traditional Laguiole knife. Following the path of his mentor, Christian Ghion hits upon the essence of the object with the “Flat” and its incredibly pure features.

Removing every decorative pattern, it gives the plates the function of grip, therefore it highlights the yatagan blade shape and its specific matt finish. The bee extends the guillochage of the spring. Three rivets fix the plates

As a result, in the hand a beautiful knife, light and almost flat with a smooth touch. «Pile side», the signature of the designer, «face side», that of Forge de Laguiole «claws» the item and emphasizes its symbolic value.

Its affordable price, somehow in tune with the philosophy of design for all, makes the «Flat» by GHION, an icon of contemporary French cutlery creation. An original Forge de Laguiole knife, both genuine and trendy. 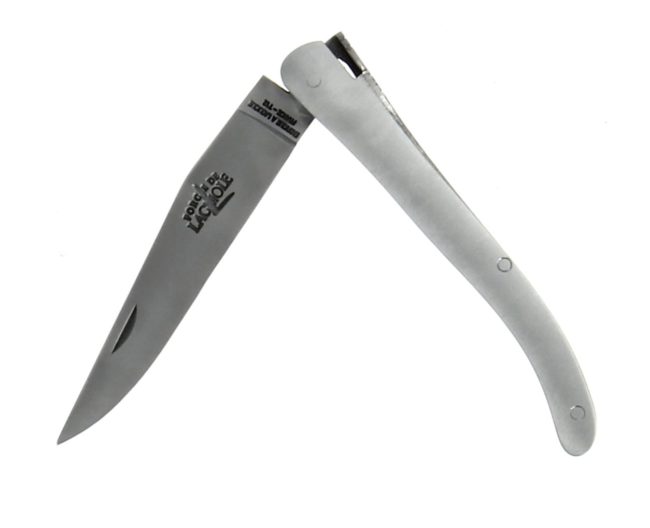 His works are showcased in the collections of the National Contemporary Art Fund, the Musée des Arts Décoratifs in Paris and the Guggenheim Museum in New York. He was made “Cheveleir des Arts et des Lettres”  in 2006; Christian Ghion is currently working with the biggest French and international brands, among them: Christofle, Alessi, or Nespreso… He also designs the prestigious exhibition «Le Luxe Français» organized by the Colbert Committee in Shanghai ( 2005).

In January 2012, he began a new collaboration with Nespresso. In September of the same year, Christofle unveiled its new “Garden” line for the bar. With Pierre Gagnaire, he draws a line of kitchen accessories for Alessi. In recent years, Christian Ghion has been entrusted with several interior design projects, including those of chef Pierre Gagnaire’s restaurants in France and abroad. The latest is the Reflets restaurant in Dubai. He has been collaborating for several years with Forge de Laguiole and la Coutellerie Nontronnaise.