Home > The Forge > News > Travels in France from Plateau to Plateau!

Travels in France from Plateau to Plateau!

3 stops to discover French plateaus and their beauties and enjoy their savoury specialities. Starting point, the village of Laguiole and its knives of course!

With its contrasting geography, its rich nature and fauna, France presents a large array of landscapes. Among them, many plateaus, one of them is the high plateau of Aubrac. In the summer, herds of magnificent cows, called Aubrac, bred and graze on it. With the horn of those cows are made the handle of the beautiful iconic Folding Knife with its forged raw steel blade. An emblem of the French cutlery know-how.

So, let’s slip our knife in our pockets and go hiking trails to discover some of the other French plateaus.

“An attraction without violence, but difficult to resist, brings me year after year, again and again, to the high bare, basalt or calcareous surfaces of the middle and south of the massif:  Aubrac…” wrote the author of Le Rivage des Syrtes (The Opposing Shore);  Julien Gracq loved the Plateau, its wildness, its “drailles”, (narrow trails), its moors, the outline of its  “burons” (shelters for shepherds) its flowers.

The place and its villages Aubrac and Laguiole, its cheese, its “aligot”, (a preparation with potatoes and cheese) are always a must for travellers in love with beautiful knives and authenticity. 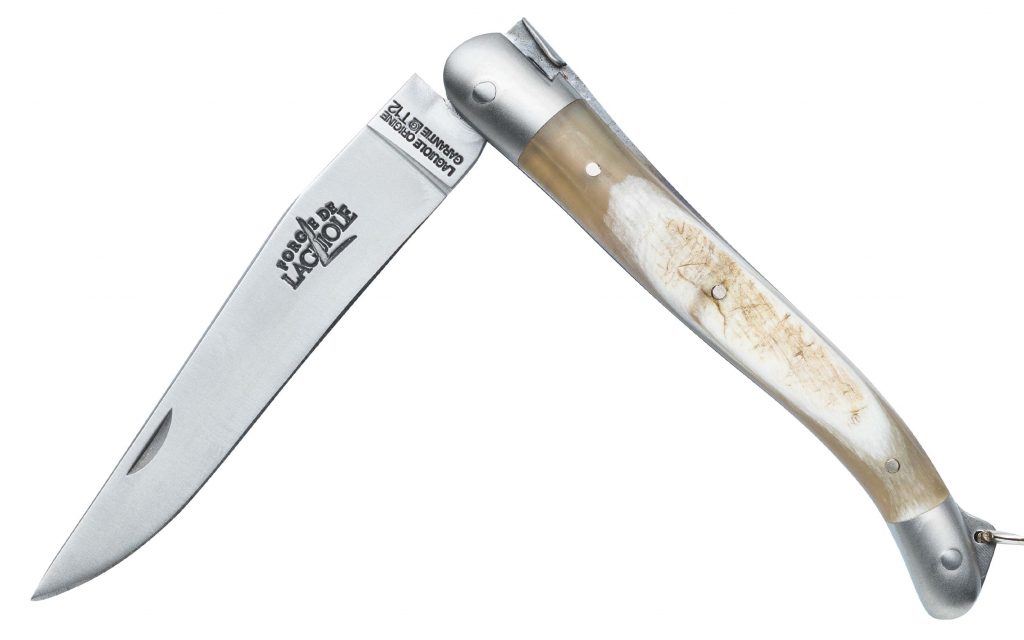 A burst of purple as far as the eye can see, here is what the walker sees first. However, the plateau of Valensole was not always the kingdom of Lavender In the nineteenth century, people thought that growing almond trees or truffle oaks was more worthwhile. Located between the valleys of the Durance, Verdon Gorge and the Lak of Sainte-Croix, this plateau that rises to 500m is probably one of the most beautiful places in Haute-Provence. Nearby overlooking the lake of Sainte-Croix, the village of Moustiers-Sainte-Marie. Famous for its “Faïencerie” the village has opened a museum to present exceptional pieces of tableware.

A delicacy to remember:  the delicious “fougasse” that can be tasted everywhere in Provence, and so at the village of Moustiers-Sainte-Marie as well as the one of “Valensole”.

Almost 173 acres and 744 meters of altitude located 10  kilometers from Clermont-Ferrand. This basaltic plateau results from volcanism. It offers a superb overview on Auvergne volcanoes, the “ Chaîne des Puys” and the “Massif du Sancy”. And yet, he owes his fame to history. It was at the very spot of the oppidum Gergovia, that Vercingetorix and his soldiers defeated the Roman legions of Julius Caesar in 52 BC. An event that Julius Caesar recounted in The Gallic Wars and on which the comic Asterix and the Chieftain’s Shield from Uderzo and Goscinny is based.

There, every year the Averniales take place: a historical show that allows to live for a weekend the daily life of Guls and Romans! Also, an opportunity to discover their own delicacies such as the stewed calf liver.

The French water Reserve said the French naturalist Buffon, since the Seine, the Marne, the Aube and the Meuse rise in the Langres plateau. Located in north eastern France, the Plateau is set between the Auxois region and Haute-Marne department. It hosts one of France’s largest natural parks: Le Parc national des forêts, which protects a wide range of trees: beech, ash, oak and alder. The town of Langres is also the birthplace of the writer and philosopher Denis Diderot. Denis Diderot was born there on October 5, 1713, last heir of a dynasty cutlery. His father and grandfather were master-cutlers renowned for their surgical scalpels.

Least but not last: gourmets and foodies will make a point of tasting a piece of Langres cheese, (a wonderful cow’s milk cheese). Of course, they will cut it with their folding knife Forge de Laguiole!