Forge de Laguiole was at the Maison & Objet fair in Paris – Villepinte from 8th to 12th September 2017 to exclusively present its new knives.

The Forge de Laguiole workshop celebrates its 30th anniversary of innovation, reinvented tradition and highly symbolic collaborations. The manufacture produces its knives in Laguiole according to a cutlery tradition going back to 1828. Two central themes prevailed after the summer break, giving rise to exceptional creations:

In the line of the collection of knives with “handles made from sand”, launched by the Mont Saint-Michel knife, the new pocket knife with a handle in sand from La Sèlves River.

New knives with a central mitre created by our Master Cutler, Stéphane Rambaud, as well as reissue and reinterpretation of iconic models.

Always against the flow, Forge de Laguiole returns towards its origins by presenting A Pocket Knife with a Handle in Sand from La Selves River, a knife intended to become legendary. The sand that is used for the handle of this knife comes from a tumultuous river called “La Selves” that rises from the Aubrac Plateau and crosses the village of Laguiole. Its color is a mix of grey and brown colors, which distinguishes it from its predecessor, the knife made of sand from the bay of the Mont Saint-Michel.

Aviation and Cutlery reunited in one knife. Nearly two years have been necessary for the engineers of Airbus and the master cutlers of Forge de Laguiole to develop this exceptional pocket knife, the Forge de Laguiole – Airbus A350XWB. Inspired from the Airbus A350XWB, this exclusive model is produced in series with a manufacturer serial number. It brings together design and advanced technology. The knife created by Forge de Laguiole has a fluent design with curves that highlights the materials: white acrylic that represents the front of the plane and the carbon that comes directly from the Airbus’ production units. The spring is chiseled with an Omega shape symbol that refers to the reinforcements of the fuselage of the aircraft. The bee of the knife has the shape of the typical cockpit and the blade looks like the wings of the A350XWB.

Knives with a Central Mitre by Stéphane Rambaud 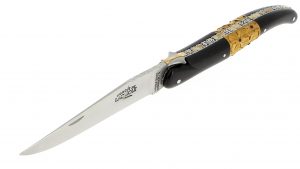 After 30 years of sharing know-how, it was time for Stéphane Raumbaud to give a special focus to one of the core elements of the famous pocket knife: the mitre. Made from brass or stainless steel, the mitre traditionally decorates the ends of a knife: one is called the front mitre, the other one the back mitre. They do not necessarily go in pairs. They aim at protecting the knife in case of a fall but also have a decorative role. Eager to renew the visual impact of the pocket knife, Stéphane Rambaud reinvented the tradition by moving the mitre to the center. A lot of exceptional models were presented on our booth at the Maison & Objet fair.